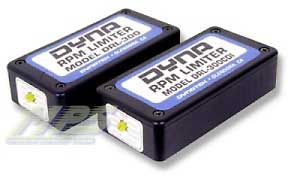 The DRL300 has an improved clamping capability, and more outputs than the DRL200. The DRL200 could clamp only 2 of our green (higher impedance) coils. The DRL300 can clamp up to 4 of our blue (low impedance) coils. This means it can be used on drag bikes, and many other applications it could not manage before (automotive HEI ignitions). In addition, the output stage has also added a separate kill input. This input works separate of the rev limiter and can function even when the rev limiter has no power. This will kill the spark whenever a 12V signal is applied to the input.

Potential uses include shift kill to kill ignitions during up shift, allowing for clutchless shifts. Instead of having to cut jumper wires to get the box to work with a particular application, and having only two choices, there are now 3 dip switches. These dip switches allow not only for a very wide range of applications (single fire thumpers to Harleys to inline 4s to 8 cylinders), but they also allow for the rev range to be adjusted from the standard 6000-12000. This means that new motorcycles with 12000+ rpm redlines can now be handled, as can applications where the limit needs to be set below 6000. 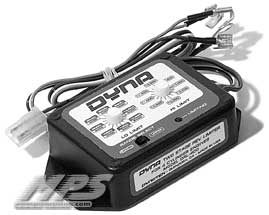 The Dyna DRL-400 Two Stage Rev Limiter has been specifically designed to maximize launch performance and over-rev protection in drag racing. The DRL-400 allows a precisely controlled launch rpm limit to be set, while also guaranteeing against over-rev damage due to missed shifts or drive train breakage. Selection between the launch limit and the upper over-rev limit is usually made through the use of a clutch lever switch. Both rpm limits are adjustable via two knobs on the DRL-400.

The DRL-400 constantly monitors the engine rpm with great precision and randomly deletes ignition pulses to hold the engine exactly at the desired rpm. The DRL-400 can hold a 270 horsepower engine to a steady launch rpm with less then +/- 50 rpm wavier. Other launch rpm limiters typically make the engine rpm waive through a pounding oscillation. This can be very hard on expensive racing components.

The DRL-400 will not work on late model EFI sportbikes.