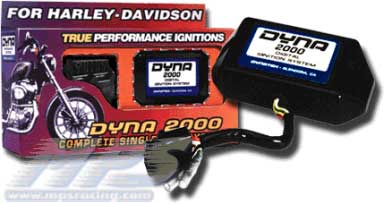 The Dyna 2000 Digital Ignition System for Harley-Davidson Motorcycles, which has become the standard for performance and versatility in the Harley aftermarket, has been enhanced to include even more features. These new modules include expanded advance curve functionality with the option to use vacuum advance compensation via a V.O.E.S. switch. The new modules also include a special Retard Mode for use with turbocharged and nitrous bikes.

The Dyna 2000 allows selection between four different advance curves. The new modules offer a quick curve which simulates a mechanical advancer for hot rod motors. There are also four independent rev limiter settings from 6000 to 7500 rpm. The new Retard Mode allows selection of ignition retard of 5, 7, or 10 degrees upon activation of retard input.

Dyna 2000 ignition modules use the stock factory pick-up and simply plug into the existing factory wiring harness on 1991 and later bikes. An extension harness is available for installing the Dyna 2000 on 1990 and earlier bikes.