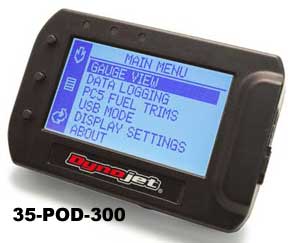 The POD-300 is an accessory display for Dynojet devices that support DJ-CAN; including the popular Power Commander V, AutoTune, WideBand 2, and CMD. Simply connect the included CAN cable and youre ready to go; theres no need to tap power or deal with other messy connections.

Need to adjust your tune in the field, or datalog the supported channels to further refine your tune? No problem, with the POD-300 youre just a few clicks away from taking advantage of the many features with its easy to use menu system. 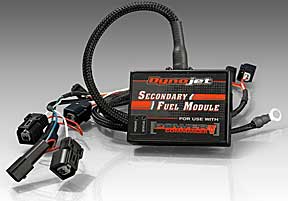 Most of todays high performance, four cylinder Sport Bikes have two injectors per cylinder. The Power Commander V connects to 4 of those 8 injectors. In virtually all cases the PCVs +250% / -100% fuel adjustability allows more than enough adjustment for all but the most radically altered engines. However, it is recognized that there are people building heavily modified engines (extreme big bore, turbo, etc) that may require the adjustment of all 8 injectors.

Enter the Power Commander V Secondary Fuel Module. The S.F.M. connects to the upper injector rail using OEM connectors. From there, it is only a single cable connection to the PCV. Once connected, you will be able to adjust both upper and lower injectors by as much as +250/-100%.

If the gear position input is connected on your PCV you will have the ability to adjust all of the injectors on a per gear basis (a complete map for every gear) as well as the ability to map each injector separately. That gives you up to 48 complete maps! There is also be a "basic" mode that allows you to have a single fuel table that simply puts the requested fuel change in both upper and lower injector modules at the same time. For those of you that have modified engines that require more fuel than 4 injectors can provide, but do not need the complexity of mapping each cylinder and each gear separately, this setting is for you.

In addition to the increased fuel adjustability the SFM provides, it also allows for the use of the Dynojet Quick Shifter sensor on 8 injector bikes. On earlier Power Commanders an Ignition Module or Stand Alone Ignition Quick Shifter was necessary to use the DQS on bikes with 8 injectors. Now, you can have both added fuel control and shifter functionality at a very low price. . 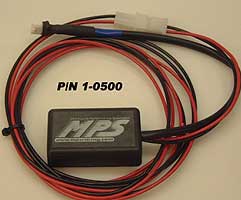 The MPS Hub Switch Relay Harness is designed to plug into the Dynojet Power Commander Hub and allow you to switch maps on the fly when your nitrous is activated. It can be wired to activate with either a 12 VDC positive signal or a ground signal.

About the Map Selection Switch

Connecting the map selection switch allows the rider to switch between two different maps within the Power Commander. For Touring Bikes this could be used to switch between a "fuel economy map" for long rides and a "full performance map."

For sport bikes it could be used for applications such as "dry nitrous oxide" kits to permit the user to make the fuel mixture richer when activating the system. Additionally, if the Power Commander has an ignition module connected it can switch to a less aggressive timing map at the same time. 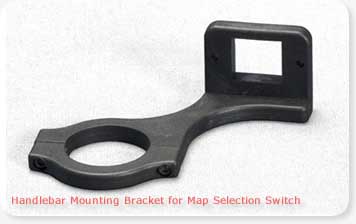 Fuel and ignition timing (when using the Dynojet Ignition Module) adjustments can be made based on gear position or speed. If the user wants to advance the timing in lower gears while retarding it in higher gears this input makes that possible. (+/- 50% Fuel and +/- 10 Degrees of timing per gear)

When using a Power Commander on turbocharged applications, the Boost input option (0-5v input) makes it possible to have the fuel automatically increase with boost level. In situations where the user has an adjustable boost controller, this makes remapping each time the boost level is changed unnecessary. (+/- 50% Fuel and +/- 10 Degrees of timing)