2022: Dynojet discountinued the PCV. It has been superceeded by the PC6. The only difference between the PC5 and PC6 is that the PC6 is carb approved and emmisions compliant for California. This means less adjustability in fuel tables and timing. Please call us if you want a PC6. Thank you. 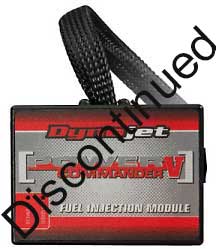 The Power Commander IIIusb was introduced in 2003 and utilizes the same "direct injector control" technology as the PCIII. The USB (Universal Serial Bus) port provides an instant, no-hassle way to connect the Power Commander module to a computer. This model also features an expansion port for future add-on modules like an ignition module.

Listed below are the remaining units in stock.
Honda